2016 is the 200th anniversary of the original trek of discharged soldiers and Scottish settlers to the Perth Settlement. These people walked from Brockville to Perth where the new settlement was founded. In May, 2016 this trek will be re-enacted and many of the participants will be descendants of the original settlers.

Clark Theobald of the Rideau Lakes Historical Society will be our guest speaker and provide details of the Trek and subsequent settlement.  The presentation will focus on identifying those settlers who headed north from Brockville in the Spring of 1816 as part of the first British government sponsored and administered settlement program in North America. Using original documents and modern technologies, we will follow their journey to Unionville, Athens, Delta and the Old Landing.

The Settlers Trek 2016 program, presented by the Athens Lions Club, will be re-enacting the original Trek of the Scottish and disbanded soldier/settlers to the Perth Military Settlement in 1816. This unique 200th Anniversary project will be attempted from May 15-20, 2016 and pass through the communities of Brockville, Lyn, Athens, Delta, Portland, Rideau Ferry and Perth. At each locale, a welcoming ceremony and community celebration will take place. Participants will include walkers and horse and wagon teams, plus there will be a separate water route from Portland to Perth attempted by the Geo-Venture class from Perth and District Collegiate Institute.

The 2016 Trek project was originally conceived by Clark Theobald out of discussions within the Perth 200th committee. Clark is a retired school teacher with a passion for local history. He will be accompanied by his wife, Elizabeth, also a retired school teacher, and Larry Cochran from Portland, a member of the Rideau Lakes Historical Society.

Two special guests will include Kathy de Souza, a descendant of John Kilborn, and Ron Shaw, a Perth author with a very strong interest in the military history of this region. 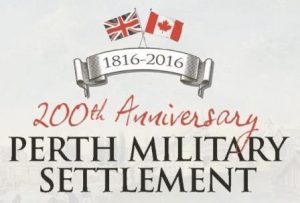